The Beatles: Band of the Sixties

Join us on Sunday for this “bonus” Red Door event! Click here for full details. 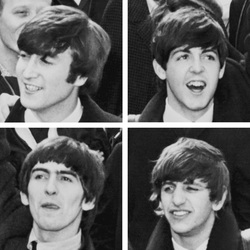 Sunday, 1 November 2015, 1:00 – 2:00 p.m.
St. John’s Episcopal Church, 679 Farmington Ave, West Hartford, CT
The Beatles: Band of the Sixties
Explore the music of The Beatles in this 60-minute multimedia presentation (part history and part musical analysis) spanning the full 1960’s: beginning with the band’s seminal visits to Hamburg, continuing through Beatlemania, and concluding with Abbey Road. The program will be supplemented with audio clips of music and excerpts from interviews with the band members.
2012 University of Hartford graduate Aaron Krerowicz is the United States of America’s only full-time professional Beatles scholar. He sang with the St. John’s choir from Easter 2011 through June 2015. In the not quite 5 months since his departure from St. John’s, he has presented his Beatles research 51 times in 12 different states, including twice in London and thrice in Liverpool. Aaron’s first Beatles book,”The Beatles & The Avant-Garde”, was published last year; his second, “The Beatles: Band of the Sixties” (based on this presentation), was released as an Amazon Kindle ebook in April; and his third, “From the Shadow of JFK: The Rise of Beatlemania in America”, was published in June. All three books will be available for purchase at the conclusion of the program.
Blog

Join us on Sunday, October 25, 3:00 p.m., for a spectacular organ concert by Charlotte Beers Plank!

Join us for the opening concert of Season 5! 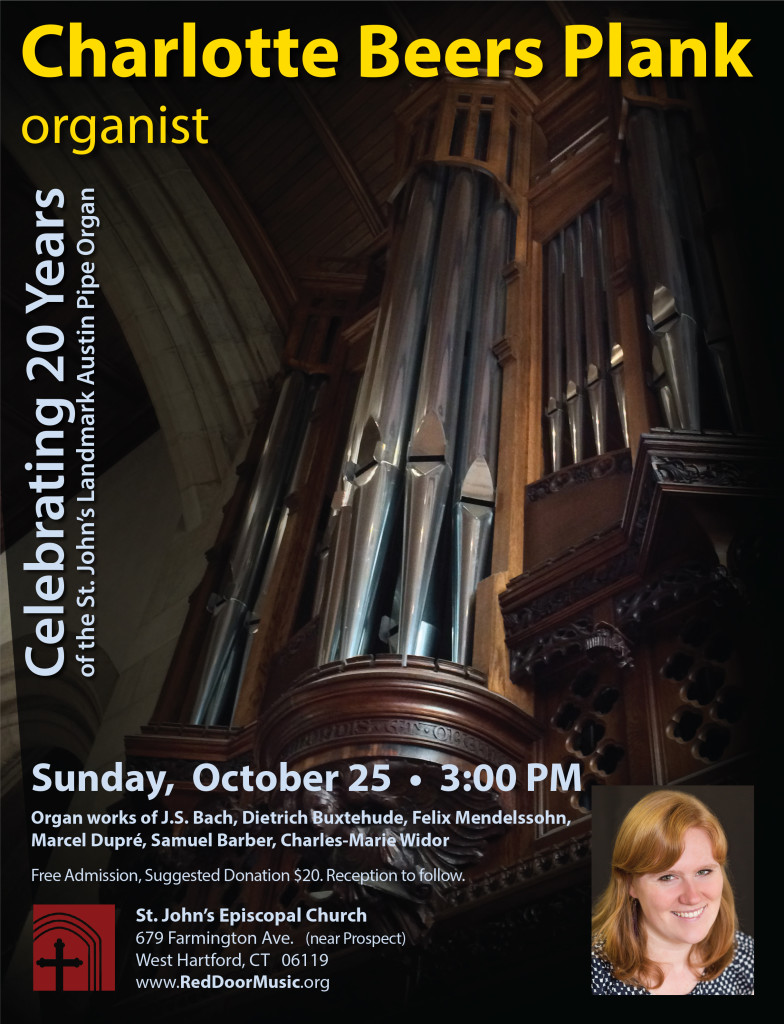 We begin the year with Charlotte Beers Plank, organist, as we celebrate 20 years of a remarkable pipe organ! Click here for details, and see you there.

Be a part of the new season at the Red Door 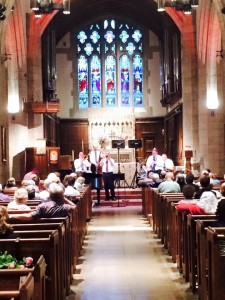 This past Friday, we completed our fourth season of Sacred Music at the Red Door in grand style, with a tremendous toe-tapping performance by the Hot Cat Jazz Band! It was a great celebration of the past year, where we reached scores of people with the great gift of music.

And now, we’re off and running with a full set of concerts for 2015-2016! I’d like to invite you to be part of our exciting new season. Check out our updated website for a full listing of events.

Sacred Music at the Red Door is a unique way to transform lives in the Greater Hartford community:

I thank you in advance for your generous donation to this exciting program. Please click here either to pledge or give today, and don’t hesitate to be in touch with me directly with your questions or comments about our music ministry. 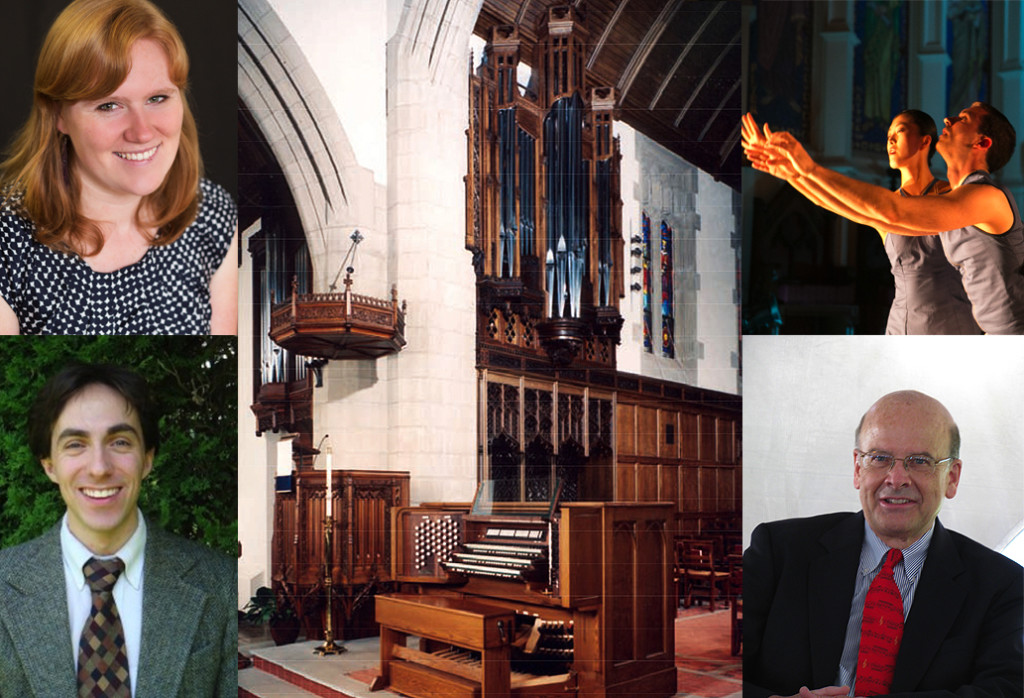 Our season concludes this Friday with a great night of Dixieland jazz with the Hot Cat Jazz Band! Check out the promo video below, and click here for more info. Hope to see you at the Red Door! 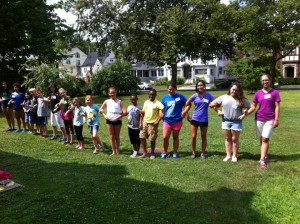 Do you love to sing? Check out the St. John’s Youth Choir!

Schedule an audition today, and join us in time for Summer Choir Camp, August 2-7 in Ivoryton, CT. 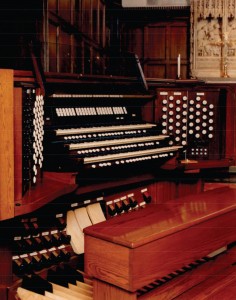 We had 60 in attendance for this Sunday’s 12:30pm concert! Join us next time if you missed us, or enjoy the printed program and podcast here:

Choral Music for the Soul in one week!

Our choirs are hard at work on the music for next week’s concert, Sunday, March 15 at 4:00pm. Check out the promo video below, and click here for more info.

Mark your calendar now for all four of these concerts, featuring the fine Austin organ at St. John’s Church: 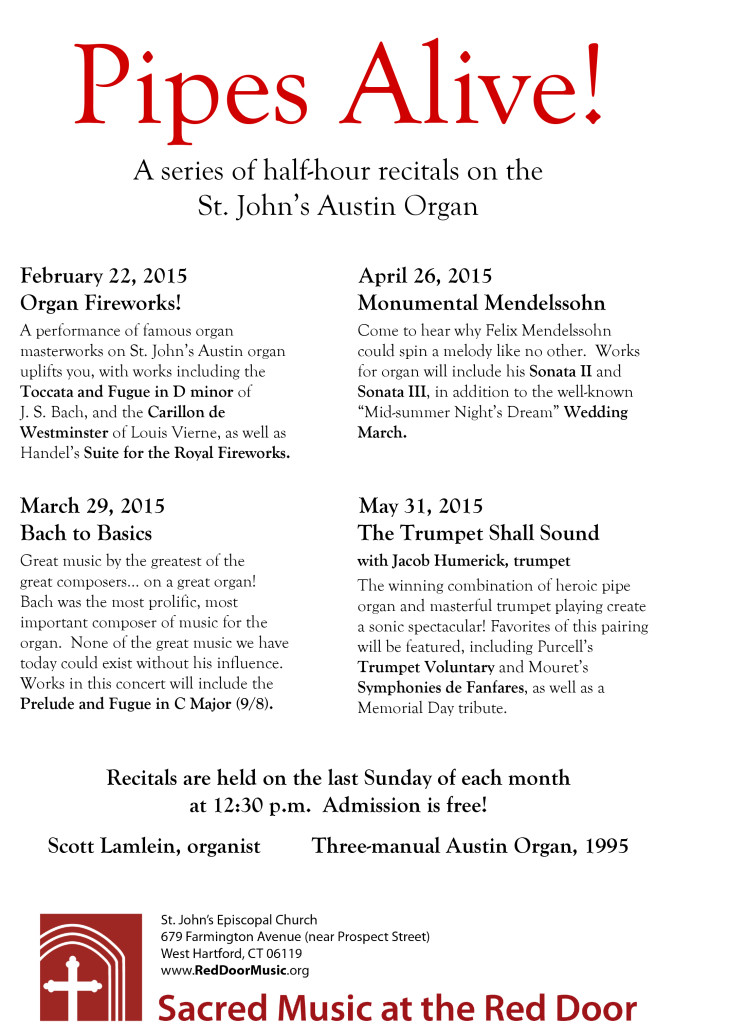 Check out our choirs in action! We’re currently preparing for the Advent Procession of Lessons and Carols on December 14 at 5pm. Click here for details and join us.

Lessons and Carols Preview from Kyle S. Reyes on Vimeo.