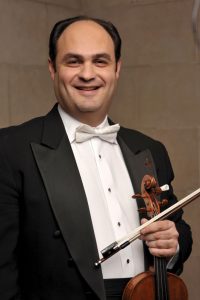 Join us for a beautiful chamber music concert on Friday, April 16, 2021 at 7:30pm by Leonid Sigal and friends. Mr. Sigal is well known for his series at the Wadsworth Atheneum, “Sunday Serenades,” where he and his HSO colleagues perform repertoire inspired by the artwork on display. He has planned a program of Prokofiev, Fauré and Beethoven.