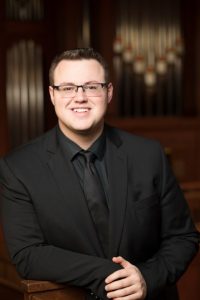 Matt Bickett regularly performs throughout the United States and Europe as organist and harpsichordist. Equally at home with historic and contemporary music, Matt centers his performances around historically informed playing styles and techniques. Reviewers have described his performances as “rare and interesting” (ClevelandClassical) and “masterfully negotiated” (Bloomington Herald Times), and his playing has been recognized with a first prize in the 2017 Quimby Competition for young organists. Recordings of his performances have been featured on Pipedreams, American Public Media’s nationally syndicated radio program.

In the US, Matt has performed at notable venues such as St. Mark’s Cathedral in Seattle, Community of Christ Auditorium in Kansas City, and in Cleveland at Church of the Covenant and Trinity Lutheran Church. Recent international performances have taken him to Kungsbacka, Sweden; Haarlem, the Netherlands; Poitiers, France; and Smarano, Italy. As an advocate for new music, Matt premiered new harpsichord works by Cleveland-area composers for the Cleveland Composers Guild’s Fall 2019 program and has appeared on many student composer concerts at Oberlin Conservatory. Other ensemble work has included performances with the Oberlin Orchestra and Oberlin College Choir, and chamber performances with Oberlin Baroque.

Matt serves as Organist at Fairmount Presbyterian Church in Cleveland Heights, Ohio, where he plays for services on Cleveland’s largest pipe organ and assists in directing the semi-professional choir. In 2017, Matt established the Oberlin Cantata Project, a period orchestra and choir specializing in 17th- and 18th-century music. Recent engagements have taken the ensemble to Cleveland venues where Matt led the group in performances of sacred cantatas by D. Buxtehude and J. S. Bach. ClevelandClassical wrote of these performances that “the ensemble played…stylishly.”

Matt currently studies toward a Bachelor of Arts in Religion and a Bachelor of Music in Organ Performance at Oberlin College and Conservatory. While still a candidate for both degrees, Oberlin Conservatory accepted him into their accelerated Master of Music in Historical Performance degree program. He studies organ with Jonathan Moyer, harpsichord with Mark Edwards and Catalina Vicens, composition with Elizabeth Ogonek, and conducting with Gregory Ristow; and has coached with Marie- Louise Langlais, George Ritchie, Bruce Neswick, and Jean-Baptiste Robin.