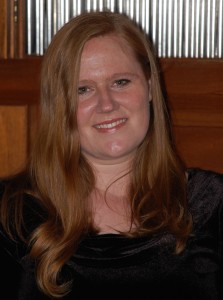 Charlotte Beers Plank is the organist and choral accompanist for Christ Episcopal Church in Oberlin, Ohio, where she has been serving since 2010.  She is active as a recitalist and freelance musician in Northeast Ohio.  Charlotte is also an experienced pianist, and serves as accompanist for a variety of choral groups throughout the area.

In May 2011 Charlotte earned her Bachelor of Music in organ performance and Bachelor of Arts in German Studies from Oberlin College and Conservatory of Music. As a merit scholarship student, Charlotte studied organ with Jack Mitchener. Her previous teachers include David Boe and Ralph Valentine.  In January 2010 Charlotte was awarded a prestigious award from Oberlin’s Creativity and Entrepreneurship program.  The Conservatory Initiative Grant (CIGSIE) enabled her to spend four weeks working at a Lutheran church in Herrenberg, Germany.  Pursuing her interests in sacred music and German under the tutelage of Ulrich Feige, Charlotte interned as a choral and vocal accompanist, organist and continuo player.

Charlotte also studied voice while a student at Oberlin, studying with Nancy Zylstra and others.  In 2009, Charlotte had a lead role in Charpentier’s chamber opera Les arts florissants, which was performed at the Early Music Festival in Boston.  She sang soprano in Collegium Musicum and the Baroque Ensmble, and performed various works by new composers.

Charlotte is currently in her final semester of her Master’s of Library and Information Science at Kent State University.  She is pursuing a career in music librarianship, and hopes to continue to find new ways to incorporate music into her life.  She and her husband Aidan, an accomplished double-bassist, live in Oberlin with their cat, Lily.