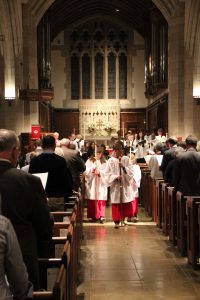 The ancient and beautiful service of Choral Evensong is presented on the fourth Sunday of selected months at St. John’s. Join us on Sunday, January 23 at 5:00pm for Evensong sung by the Anglican Singers; Benjamin Pearce Straley, choirmaster.

This event is free admission, donations welcome in any amount. Checks payable to Music at the Red Door or click here to donate online.

The Choristers who are The Anglican Singers have a deep interest in music of the English choral tradition and hail from a wide variety of musical and personal backgrounds.

Each of the singers is individually auditioned, highly motivated, and drawn to the beauty and rich tradition of the group’s music. Many of the singers are members of other professional and non-professional choral groups within the southeastern Connecticut area. The Singers rehearse from September through May with upwards of eight performances during this period, including one or more venues outside of the local area.

Because of their high level of dedication and performance, the group has been invited to sing at numerous venues throughout New England and beyond. The Berlioz Historical Brass requested the Singers to premiere Clifford Bevan’s Mendelssohn’s Seasons for choir and historical bass at the 2009 Amherst Early Music Festival. The Singers have also premiered two works by the eminent composer Robert J. Powell: the Magnificat and Nunc Dimittis in G minor (written in 1965 but not performed until 2007) and Benedictus es, Domine, written and performed in 2008 to honor the retirement of the group’s founding director, Marianna Wilcox. In December of 2012, the singers performed the world premiere of a new carol, “Unto us a child is born,”  written by renowned composer Peter Neidmann for The Anglican Singers. The piece is currently in publication by Paraclete Press. 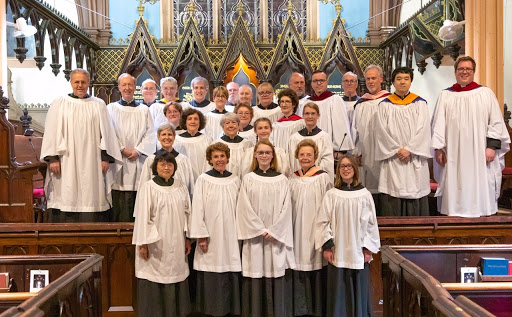 The independently organized Anglican Singers are fortunate to have been guest Artists-in-Residence since 1996 at historic St. James Episcopal Church in New London, Connecticut.

What is Choral Evensong? “Evensong … is a very tiny fragment of something else:  it is a fragment of the worship which is offered to God by Christian people every hour in every part of the world. When you come to Evensong here it is as if you were dropping in on a conversation already in progress — a conversation between God and people which began long before you were born and will go on long after you are dead.”

Why celebrate Evensong? Evensong offers to us the opportunity to gather and spend time in prayer while listening and participating in music that is especially selected to bring us into deeper understanding of the mysteries of our faith.

What should I expect at Evensong? Hymns, readings, Anglican chant and anthems sung by the choir

Will there be a sermon? No.

Why does the choir sing so much at Choral Evensong? In Choral Evensong the choir sings on “behalf of” the congregation. The settings of the Canticles of Mary (Magnificat) and Simeon (Nunc Dimittis) are always sung by the choir alone. The Suffrages (prayers) and the Responses between the Officiant and People are also sung between the Officiant and Choir on behalf of the people.  This allows the congregation time to meditate and enter into deeper prayer through words and music.

What is a canticle? A canticle (from the Latin canticulum, a diminutive of canticum, song) is a hymn (strictly excluding the Psalms) taken from the Bible.

Please plan on joining us for this beautiful and uniquely Anglican form of worship.
« New World Trio: Ensemble-in-Residence at the Red Door» Jazz at the Red Door: Sarah Hanrahan Quartet