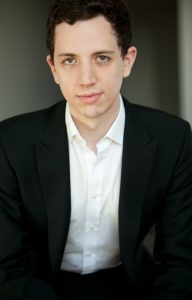 At St. James’s, Vaughn is passionate and deeply committed to the vocal and musical training of youth, and dedicated to finding new ways for our choir and music program to broaden its role in the greater community.

In addition to his work in the church, Vaughn served on the vocal coaching faculties of Sarah Lawrence College and Concordia College, New York, and conducted chamber operas by Britten and Menotti, as well as several musical theater productions while at Young at Arts. He recently served as Chorusmaster for Connecticut Concert Opera’s 2015 production of Tosca, Opera Connecticut’s 2016 production of Hansel and Gretel and their 2017 production of Rigoletto.

Born in New York City and raised in Albany, New York, Vaughn began his musical career as a chorister in the Cathedral Choir of Men and Boys, Albany, and later at St. Peter’s Episcopal Church, Albany. He continued his organ studies with John Rose at Trinity College (Hartford), earning a B. A. with Honors in Music in 2007, and at the Yale School of Music and Institute of Sacred Music, earning a M. M. in Organ Performance in 2009 under Martin Jean, Thomas Murray and Jeffrey Brillhart. He has performed solo organ recitals at the American Cathedral in Paris, Washington National Cathedral, St. Thomas Church Fifth Avenue, the Cathedral of St. John the Divine, and as a collaborate organist with Sigur Rós at Lincoln Center’s White Light Festival.

Vaughn is Artistic Director of the Albert Schweitzer Organ Festival Hartford, a national performance competition for young organists. In July, 2018, he directed a Pipe Organ Encounter at Trinity College for teen organists from around the country.