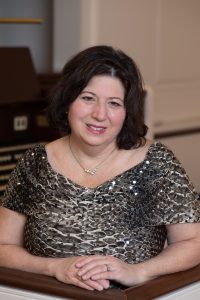 Registration to attend in person is encouraged.
Please do not register to watch online – click on the link below to watch.

ANGELA SALCEDO is the Organ Lecturer at the University of Connecticut, as well as the Director of Music Ministries at First Church of Christ, Congregational in Glastonbury, Connecticut. As a frequent recitalist on organ and harpsichord, Ms. Salcedo has performed with The Mostly Baroque Players, a Connecticut early music ensemble. Her extensive performance career has included recitals at AGO Conventions and Pipe Organ Encounters, as well as the premier organist for the 2001 Scranton Bach Festival in Pennsylvania and recitalist on the highly acclaimed Summer Evening Organ Concerts at the Old West Church, Boston. Her international studies at the Bach’s Organ World Tour of Germany (2010), Academy of Italian Organ Music, Pistoia, Italy (1988) and French Organ Music Seminar, France (1999) have included concerts on various instruments throughout the Tuscany area of Italy as well as Paris, Bordeaux and Toulouse, France. Ms. Salcedo was a first prize winner of the Strader Organ Competition, Cincinnati (1982) and was one of twenty-five organists chosen throughout the country to compete in the 1993 and 1995 National Young Players Competition. Always an active member of the AGO, Ms. Salcedo was instrumental in organizing the first National Organ Competition for High School Students, The L. Cameron Johnson Memorial Organ Competition which is now in its twenty-sixth year. Ms. Salcedo holds a Doctor of Musical Arts Degree in Organ Performance and Literature at the Eastman School of Music (2019) as well as degrees from the New England Conservatory of Music (MM) and The University of Cincinnati, College-Conservatory of Music (BM).