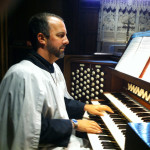 Back by popular demand, the Pipes Alive! series continues with Scott Lamlein playing the St. John’s organ on Sunday, April 7 at 12:30 p.m. Scott is Director of Music and Organist at St. John’s Episcopal Church, West Hartford, and Artistic Director of its Music at the Red Door concert series.

Can’t make it? Check out the live stream either during or after the performance: